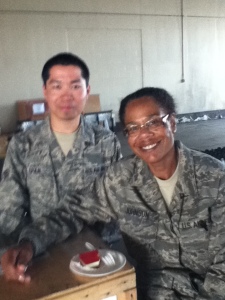 Verretta Johnson is a fleet safety and training instructor at Omnitrans who also serves as Air Force Active Reserve. She first joined the military just before she turned 22.

“I was living in Oxnard with my parents and knew that I wanted more. I loved being around people.  I loved to travel and wanted a career.  I didn’t want to be that person who spends her entire life in the same little town she grew up in. So I went down to the recruiting office and signed up for the Air Force.”

For years she was stationed in Riverside, never imagining she would ever be involved in a war. Then everything changed with Operation Just Cause. Verretta was given orders for Panama and instructed that her family would not be allowed to come with her. This was a devastating blow because she had recently gone through a divorce and had two small children who were 2 and 5 at the time. The two children would have to live with her mother over the next year.

“When I arrived there I immediately knew why. Huge tanks, demolished buildings and cement barricades were everywhere. I would wake up to the sounds of bombs dropping.  It was a definite life changer for me.  The bowling alley became the morgue. The supply warehouse for cold storage held the bodies. I woke up early one morning and saw a flatbed truck piled with body bags. When the driver made the turn, one of them rolled to the ground. It was a nightmare. Houses and apartment complexes were being blown to pieces while they were looking for Noriega. They would tell us that a couple of hundred people had been killed, but it was much more than that. These were 14 story high apartment buildings!  You knew that innocent civilians are being killed. There is nothing that can prepare you for that. My job was in supply, mostly keeping track of weapons-everyone was accountable for their equipment. Often I was getting up at 3 a.m. to retrieve top secret information from the safe for officers.”

“Despite it all Panama itself was beautiful. I could go outside and pick a mango off a tree. There were rich jungles, and animals like lemurs and iguana. The natives were some of the most gorgeous people I had ever seen in my life.  I would love to retire and live there. The food was amazing. You could go to the beach and get your food right out of the ocean within 5 minutes. Friends in the army and marines would come over and cook for shrimp and giant lobsters for us. We were pretty much restricted but made the best of it.”

“After 7 months I was finally allowed to go home to see my children. My mom hadn’t been letting them watch TV because the oldest knew where I was, and they were always showing pictures of Panama burning and all that. The hardest part came when I finally had to go back. My son grabbed leg, screamed and cried. It broke my heart, and I promised him I would never leave him again. Soon after, the Air Force began downsizing and offering people the opportunity to get out of the military. So I left active duty.”

“Once my kids were grown I decided to return and re-enlist in the Air Force at 50.  A lot had changed. They now have new fitness requirements every 6 months that include runs, sit-ups, and men’s push-ups—things that are a lot harder to do when you’re 50.  When I first enlisted, we had rolodexes, microfiche and binders. Now everything is electronic with ID card long ins. I had to start from scratch and learn new things. On top of that I was training these young people who are my kids age, and they are looking up to me because of my rank and my maturity level. I had to make sure I could train them and teach them what they needed to do. You want to make sure they are prepared. “ 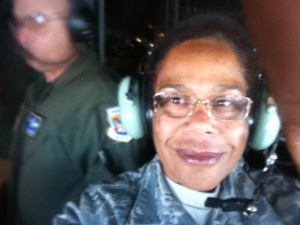 “I love the military and really hope I can continue. I don’t know how long my body will let me hold out, but as long as I can do it I will. I would like to put in my 20 years.  I love this sense of commitment and trying to do a good job and knowing that it matters. Coming from the military to Omnitrans was very much the same. When I’m training, I need to make sure that my students know what they’re doing and can do a good job. Just like in the military, anything can happen. You have to know how to handle yourself because there is no time to think about it.”

“I have friends I met in basic training who are still close friends today. We all celebrated our 50th birthday together. It’s like Omnitrans. You’re here for so long that people become like family and you look out for each other. Military was no different. You see each other through births, deaths, divorces, hardships, everything. You’ve been through so much together that you understand each other better than anyone else.  You would never leave a soldier behind or a coach operator stranded in the road. That’s just the way it is.”

Do you like this story and want to use it for your blog or newsletter? All our stories may be freely re-posted and shared with others!

Do you have a great Omnitrans story to share? Let us know!
Email Juno Kughler Carlson at  juno.carlson@omnitrans.org